Whats New in the Archives 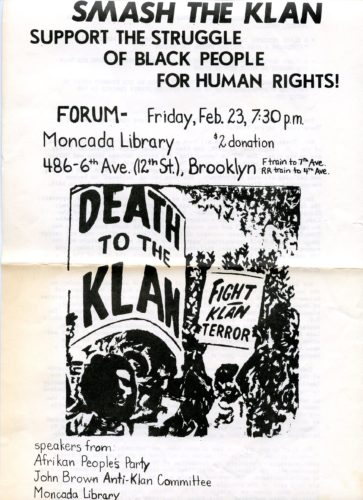 Recently, the archives received a box of materials filled with wonderful resources including a number of great documents from the Moncada Library, formerly located in Park Slope Brooklyn New York. We are really excited about these resources which illustrate that archives, libraries and related spaces can play an important role in galvanizing anti-imperialist struggles.

In their own words:

“The Moncada Library is an anti-imperialist community organizing center and lending library. We take our name from the historic Moncada barracks in Santiago, Cuba, site of the major military assault that launched the victorious Cuban revolution on July 26, 1953.

We work in Park Slope to build an anti-imperialist movement which takes on the struggle against white supremacy and fights in solidarity with national liberation struggles here and around the world. We take leadership from the Black liberation movement and other Third World Liberation movements, whose struggles for human rights and self-determination define the only strategy in this country to defeat white supremacy and U.S. imperialism.

We are committed to building a revolutionary anti-imperialist women’s liberation movement that fights under the leadership of Third World women freedom fighters who struggle against genocide and for the full liberation of their nations.

We are a project of the May 19th Communist Organization.”

The materials from the Moncada Library represent many of the same organizations, movements and campaigns already in our collection.  For example, the library supported the defendants in The Springbok 5 case, which stemmed from Anti-Apartheid demonstrations. Furthermore, the library aided in community organizing efforts around racist police and neighborhood watch group (Slope Citizens Anti-crime Network) activities in the neighborhood.

We are excited about the materials from the Moncada Library not only because of their historical relevance, but also because of what the library represented. The Moncada Library had a direct impact on the citizens of Park Slope, not only by serving as a space for dialogue and resistance but also by producing countless resources to educate, organize and galvanize the local population to resist racism and imperialism. These efforts not only challenge the idea of libraries and archives as being neutral spaces disconnected from the communities in which they exist in but also place the efforts of organizations such as the Freedom Archives in a historical continuum.