Out of Control: Chapter 20–Two, Three, Many Demonstrations, 1992

We were searching for a strategy to dent the stranglehold the BOP had on Congress. We thus decided for the following year (1992) to organize a campaign to demand Congressional hearings. We gathered the names of the members of Congress on the relevant Subcommittee on Intellectual Property and Judicial Administration, and sent them out to all our supporters, requesting that people write letters, make phone calls, and send telegrams to their closest Representative and to the head of the Committee, William Hughes. In February, CEML member Russell Brinkman set up a way for people on our mailing list and other supporters to easily telegram the members of the Subcommittee.

In the Fall of 1991, we heard that Indiana state prisoners at Westville were conducting a hunger strike over their conditions—solitary confinement 23 hours a day, beatings, forced cell changes, shacklings, and lights on 24 hours a day. They referred to the prison, which had opened the previous spring, as a “Supermax” facility, and it sounded very much like Marion. In January we heard that one of the prisoners had cut off his finger and tried to send it to state officials. 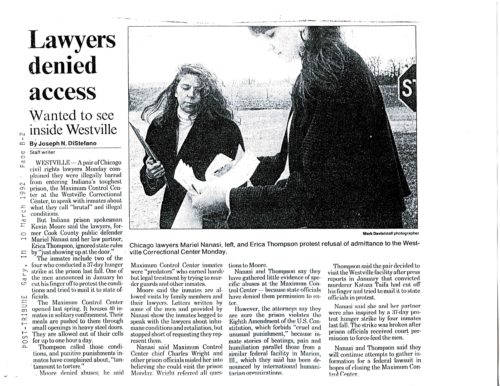 Several of the newer members in the Marion Committee were smart, articulate, and courageous lawyer-activists. Erica Thompson, Mariel Nanasi, Steve Pick, and Tim Loraff brought great new energy to the Marion Committee. They decided to visit the prisoners at Westville and perhaps file a class action law suit on their behalf. On March 9, 1992, after following all the necessary procedures, the two lawyers set out for the Maximum Control Complex in Westville, Indiana. After waking at 5 a.m. to drive to Indiana and arrive promptly, they were illegally barred from visiting the inmates, ostensibly because they were not Indiana attorneys However, Erica and Mariel were not ones to back down easily. They held a press conference and received coverage in the Chicago Daily Law Bulletin (March 17, 1992), as well as the Gary Post-Tribune. The Post-Tribune article featured a big photo of Erica and Mariel and the headline read “Lawyers Denied Access.” 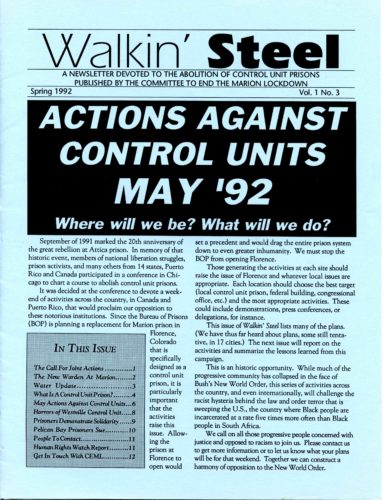 Members of our committee were involved in work around Marion, Florence, and now Westville. The blue issue of Walkin’ Steel Vol. 1. No. 3 (each issue was a different color) came out in early spring of 1992. The front page headline was “ACTIONS AGAINST CONTROL UNITS MAY ’92,” and the centerfold had a piece on each place where there was ongoing organizing—Madison, Toronto, Birmingham, Kansas City, D.C., California, Colorado, Indianapolis, Iowa, Philadelphia, Hartford, and New York.

In Illinois we made our usual grand plans. Along with the National Committee we planned to go to three prisons in one day on May 2nd. This was an attempt to link various aspects of imprisonment—control units, the increasing population of women in prison, and the racist and inhumane use of the death penalty. Beginning at Dwight Correctional Center, Illinois’ prison for women, we would continue on to Menard Correctional Center, which at that time housed Illinois’ death row. There the population was even more Black than the rest of the Illinois prison system. We would end the day at Marion.

In preparation for May 2nd, we spoke to many different groups to get our message out and to encourage people to come along with us. This series of programs concluded on April 26, when we held a public meeting about the relationship of prisons to racism. Many people we had never met showed up. After showing our video, “Shut Down the Control Units,” we had a very energetic two-hour discussion.

On April 29 a Ventura County, California jury of 10 white people, one Latino and one Asian (not a single Black juror!) acquitted the Los Angeles cops who had badly beaten an African-American man, Rodney King, despite the fact that the attack was clearly caught on videotape for the whole world to see. The news of acquittal triggered the Los Angeles rebellion of 1992. The police, the U.S. Army, the Marines, and the National Guard were brought in, and when the smoke cleared, there were 53 deaths, 2,383 injuries, more than 7,000 fires, damage to 3,100 businesses, and nearly $1 billion in financial losses. Smaller rebellions occurred in other cities as near to L.A./Ventura as Las Vegas, and as far east as Atlanta, Georgia.

It was against that backdrop that 150 of us from Chicago set out on the morning of May 2nd. We gathered at 6:00 a.m., as usual at the Puerto Rican Cultural Center, and left in three buses, seven vans, and five cars. At Dwight, our first stop, we unfurled banners, placards, and sound machines, demonstrated, and heard a message from Puerto Rican political prisoner Alicia Rodríguez, imprisoned at Dwight, read by her mother, long-time independentista Josefina Rodríguez.

We also heard from Jana Schroeder who had come all the way from Dayton, Ohio to travel with us. Jana, who worked for AFSC, delivered a talk about women in prison and finished with a passionate poem written by political prisoner Laura Whitehorn. We finished this rally with a message from Wakirisana Ehehosi from the Spear and Shield Collective who spoke on behalf of the Malcolm X Grassroots Movement.

In 1992 Jaan Laaman speaks out for political prisoners

Five hours later we arrived at the gate of Menard prison, literally the gate, as we managed to stand just a few yards from the main entrance of the prison and a long line of guards. After a loud and raucous demonstration, we heard a message from political prisoner Luis Rosa, imprisoned at Menard. The message was read by his brother, Felix Rosa, himself a former political prisoner. Steve spoke as well, discussing the 114-year history of Menard and the racist nature of death row and imprisonment more generally. Reverend José Torres concluded the rally with a brief religious service. His wife, Alejandrina Torres, as well as his son Carlos Alberto Torres, were both Puerto Rican political prisoners at the time.

Two hours later we arrived at the gates of Marion. Here, the energy was even greater than it had been at the other two prisons, and this after 12 long hours of bus riding and two prior demonstrations. None of this mattered; we were all where we wanted to be, and only that mattered. 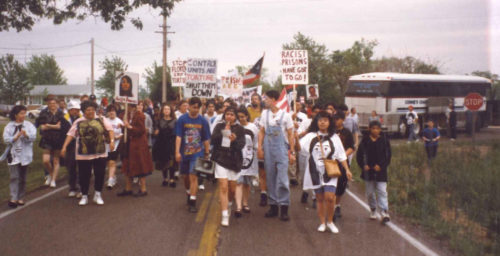 As we approached the gates, dozens of demonstrators went right to the fence and held up banners and placards, deliberately blocking the view of the guards and police on the other side who were attempting to videotape us all.

After an extended picket line, and interviews with two television stations, we heard solidarity messages from many of the participating groups. Mariel, who had earlier in the day visited many of the prisoners, spoke and brought back their statements of determination and encouragement.

Fay Dowker, also from CEML, spoke passionately and with quiet tears, about the interrelationship between combating these institutions and other government policies. A citizen of the United Kingdom, she said that on the British news when there is a story about U.S. politics, they always show the White House as a symbol of U.S. power. Fay suggested it would be more appropriate to show a picture of Marion because it is the “real dark heart of the U.S. where the government incarcerates those it feels most threatened by.” The final speaker was Lourdes.

We arrived back in Chicago at 5:00 a.m., 22 hours after we had left. Through the summer and fall of 1988, the whole country watched the debacle of Democrat Dukakis‘ attempted run for President, as George Bush and the Republican Party attacked Dukakis for supporting a Massachusetts prison furlough program. When Dukakis was Governor of Massachusetts, a prisoner named Willie Horton who had been released was later arrested and accused of heinous felonies. Although Dukakis’ candidacy had been looking good, Republican racist fear-mongering successfully filled the mass media and Dukakis’ campaign was buried in the sand.

Following the May activity, we geared up to make the trip to the Metropolitan Correctional Center (MCC) in Westville, Indiana where we would hold a demonstration on July 11, 1992. 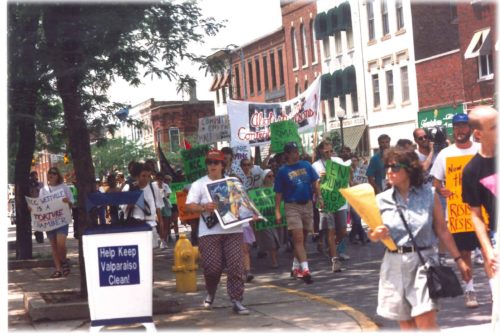 The demonstration began in Valparaiso, a small college town in northern Indiana, located just ten minutes from the MCC. The demonstrators immediately took the street and marched around the town square with huge colorful banners, chanting “Fight Racism, Smash the MCC,” and “Stop the Genocide in Indiana.” A rally at the courthouse featured speeches by members of the African National Prison Organization, CEML, the Indiana Human Rights Coalition, the National Committee and the Chicago Co-Conspirators. Student activists from Valparaiso University joined us and spoke of the need for the local community to raise its voice. Placards read, “Valpo refuses to be Simi Valley,” a reference to the place in Ventura County, California where the cops who beat Rodney King were acquitted.

We assembled at the beginning of the mile-long road to the gates of the prison, and began our trek to the MCC. As we marched, the prison cops were joined by town police in an obvious show of force. Rifles glinted in the distance as the Hoosier military was deployed to the adjacent fields. As we approached the gates, police cars nearly collided trying to block our entrance, but we successfully maneuvered into the drive. The crowd was energetically shouting “Shut it Down!” 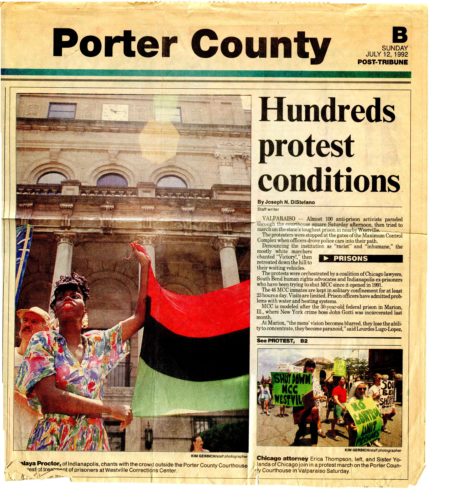 We were informed that the entire population of MCC had refused food that day, as statements of prisoners were read to the protest. The situation was becoming increasingly tense vis-à-vis the police, so we crossed the street for the conclusion of the rally. Family members of the prisoners joined us with words of courage and devotion. Just before the rally ended, the cops grabbed a family member. Demonstrators fought back, “unarrested” her, and formed a human tunnel back to her car. We marched back to our own cars in the blazing sun with our hearts beating fast. The Porter County newspaper, the Post Tribune, reported “Hundreds Protest Conditions.”

One week after the demonstration, amid widespread media reports of abusive conditions, Commissioner James Aiken of the Indiana Department of Corrections resigned. In the Fall of 1992 we produced a new edition of Walkin’ Steel, Vol.2, No.1 (tan issue) with articles about Westville, Florence, and the past May demonstrations around the country. In the fall we drew up an agenda for a strategy session that reflected the different directions we were attempting to pursue. And yet there would soon be even more on our plate. No matter how hard we worked, Control Units were proliferating, as we had been predicting for years. In November we heard that Illinois Governor Jim Edgar’s Task Force on Crime and Corrections recommended construction of a $60 million “super-maximum” prison, the first of its kind in the state corrections system. It was definitely “winter in America”.

Letters from prisoners at Marion and around the country continued to pour in. We probably could have used a full-time person just to respond to the mail, but that task continued to fall to Steve and other members of the committee.

Before Christmas that year a card came to CEML’s post office box. With an illustration of a bell decorated with blue ribbon and green holly, a big red ball and chain was ringing the festive bell. “From all the Prisoners in the United States Federal Penitentiary Marion, Illinois,” it said “We do love and appreciate you and your work— and we hope that each of you enjoys a holiday season filled with Peace and Quiet, nice music, good food, renewed friendship… and a rejuvenated spirit.”

Next: The Work Quadruples
About the Book | TOC